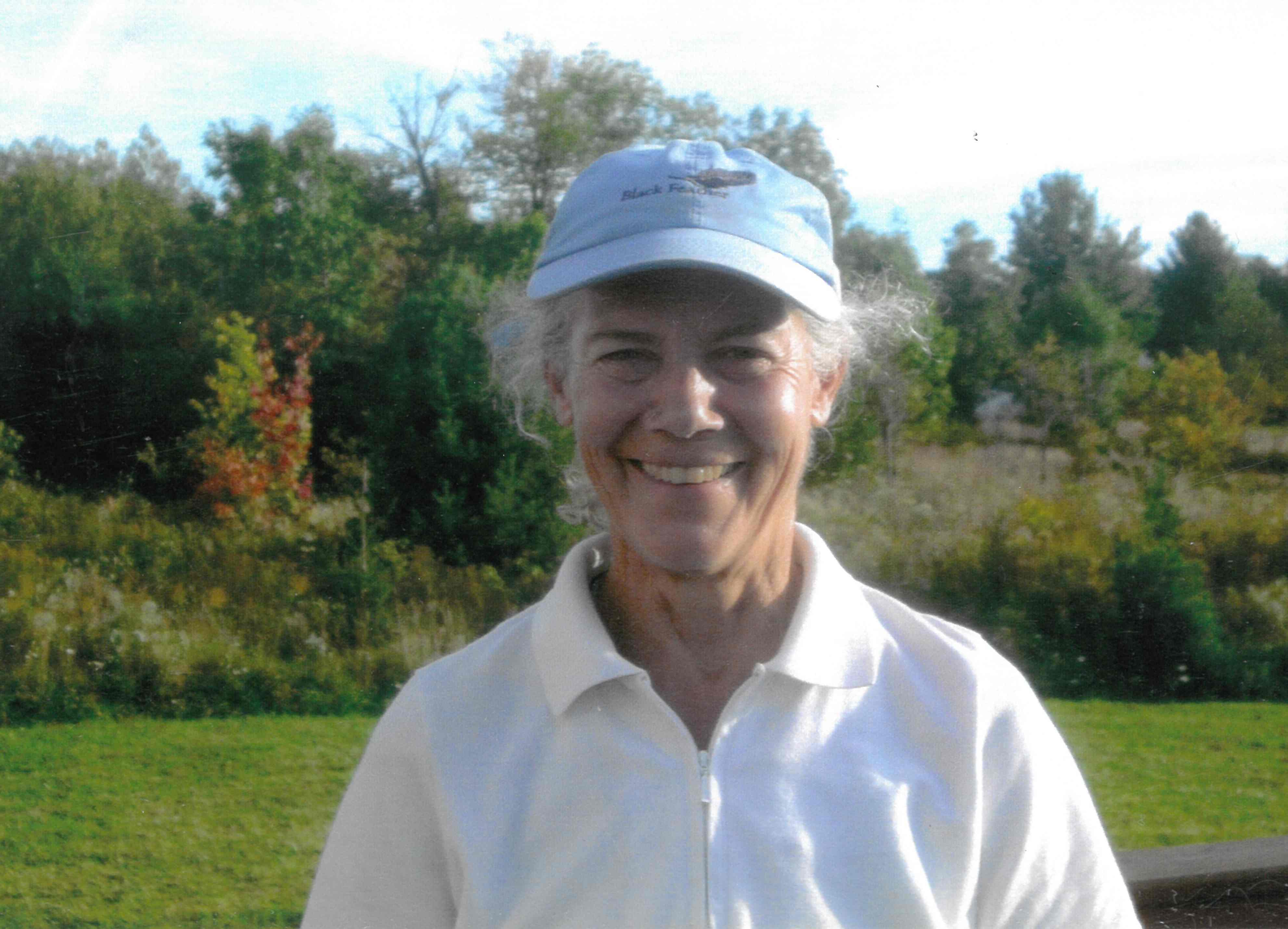 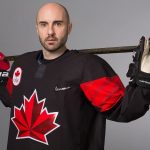 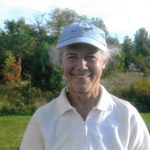 Sally Manning lived for the love of the game, and she was remarkably good at the game. Sally become the consummate sportswoman, outstanding amateur athlete and international all-star we acknowledge and honour today with her induction into the Bobby Orr Hall of Fame. In the Parry Sound community Sally expressed her devotion to the game most emphatically on the golf course, the ice hockey rink, and the cross-country ski trail. The skills, leadership and joy of competition that defined Sally were developed decades earlier across a wide spectrum of sports in which she excelled. Love of sport and the outdoors gave her life meaning.

She was born in Toronto in 1949 and grew up on the family orchard outside the little village of Maple. From Grade 1 to 7 Sally attended a century old one-room school, Carrville, two miles distance from home. With no school bus Sally had to hustle, run, or bike, or occasionally skate or ski, to make the bell in time; a daily routine of physical exertion evolved into a habit of Sally’s life.

In the early 1960s pick-up hockey on the pond gave Sally a thirst for more organized sports engagement and competition. At the time the only organized girls’ sport in the area was softball so Sally joined Maple’s Softball League for Girls and pitched the team to a Championship in 1961 and, again, with her school team in 1962; auguring of things to come. The experience of organized sport launched Sally on her fifty-five-year pursuit of excellence in amateur sport. At Richmond Hill High School an athletic highlight for Sally was the gold medal win of her relay team at the First Toronto Telegram Maple Leaf All-Ontario High School Indoor Track Meet. After graduating with her school’s athletic award in 1969, Sally enrolled in the Physical and Health Education programme at the University of Toronto where her love of the game of ice hockey found a new outlet on the field hockey pitch.

Over the next decade the skill, athleticism and teamwork that typified Sally’s exceptional sportsmanship was amply demonstrated on the field hockey pitch. Sally played on many championship teams at the university, provincial, national and the elite international level. One of her fellow Canadian teammates said of Sally, “In fact, she was better than most players in the world.”

1980 brought Sally’s crowning achievement. She was named to The International All-Star Field Hockey Team, “The President’s XI.” Sally became the first Canadian to receive this elite international recognition. For this achievement she was inducted into the University of Toronto Sports Hall of Fame and the Vaughan Hall of Fame.

Sally was named as a member of the Canadian Olympic Women’s Field Hockey Team for the 1980 Olympic Games in Moscow, but a Canadian boycott brought an abrupt end to her Olympic dream. Sally retired from the field hockey pitch shortly thereafter and headed for Parry Sound and its golf course, arena, and ski trails.

Bobby Orr had a vision that this Hall would honour all contributions to sport in Parry Sound. The banner that hangs in Sally’s name recognizes her excellence in golf, ice hockey and cross-country skiing.

Sally was familiar with Parry Sound from a young age. Along with her brothers and sisters she fished, canoed, and camped with their father in the district. Her permanent attachment to this community began in the early 1980s with her involvement in Parry Sound’s Black Feather Group with whom she paddled the great northern rivers, kayaked amongst the icebergs of the Arctic Ocean and cycled Barrens of the Northwest Territories and Yukon. She joined the Parry Sound Phantoms hockey team in the 1990s, retired from teaching in 2003, bought a property in McKellar and built her home. From then on Sally’s days became fully dedicated to refining her skill and extending her endurance across a range of sports. She cycled from March to December, but when winter conditions curtailed daily long-distance roadwork, Sally shifted her aerobic workouts to mastering the trails of the Georgian Nordic Ski Club and playing for the Phantoms. And then there was golf! Sally’s second home was the driving range. At the Parry Sound Golf Club, she practised her swing rigorously by working her way through several buckets of balls every day of the week regardless of weather conditions.

Yet, in all these endeavours Sally’s sense of humour, humility and comradeship with teammates was as much a part of her love of the game as its demand for high level performance and perseverance.

In golf “Sally’s coachability, willingness to listen and fierce competitive spirit” along with her prodigiously exuberant practice regimen were key factors in her success. She had a remarkable ability to concentrate with intensity throughout 18 holes of golf though her casual demeanour often disguised her keenly competitive streak.

Sally practised hard and long to win the Parry Sound Club Championship 2010. She retained the title for the next two years. She won Senior Ladies Club Champion four times from 2008 to 2012. She was top of the leaderboard for Match Play Championship and the PSIB Ladies Invitational in 2008. Sally was selected several times to represent the Parry Sound Club at the Champion of Champions Tournament in Peterborough and at the Senior Women’s Provincial Championships. For three years in succession Sally’s low gross scores secured a victory for the Parry Sound June Days Team at the Huronia District Team Championships. And a personal milestone for Sally was hitting a hole-in-one on the Par 3 second hole at the Club.

These achievements marked four decades of intense devotion to the game. Even at the height of her success on the field hockey pitch in the 1970s, Sally played golf. She received the Ontario Provincial Award for Greatest Reduction in Handicap in 1974, played in the Canadian Ladies Amateur Championship that same year and was a member of the Ontario Match Play Golf Team from 1975 to 1977. It is a record of distinction and yet, as her golfing partners at the Parry Sound Club attested, “it was her character that defined her greatness. She represented the Parry Sound Golf Club and the game of golf with integrity, sportsmanship and a quiet modesty.”

In honour of Sally’s many achievements on the course and in the clubhouse, the members of the Board at Parry Sound Golf Club renamed the Women’s Invitational to ‘the Sally Manning Invitational’ to reflect the love and respect they held for Sally. One of Sally’s competitors said of Sally that “she was definitely a star golfer, but her attitude is what made her a shining star. Sally gave Parry Sound a good name and represented her Club superbly by being so courteous to outside players like myself.”

Hockey was THE sport Sally played over her lifetime devoting almost six decades to stickhandling a puck or ball. In Sally’s youth there was virtually no organized ice hockey for girls and that was frustrating for a girl who longed to achieve the high-level skill she watched on Hockey Night in Canada. In the 1990s when Sally joined the Phantoms, women still had to fight for time on the ice, not even equal time, just time.

As a Phantom, Sally was close to fifty when she played with and against eager twenty- year-olds. The rumour is that Sally’s equipment was just as old as she was! Once, when the bench was short, Sally played the whole game. She was exceptionally skilled at handling the puck and deking the opposition. This was evident in her winning top scorer in the regional league in 2001, 2002, and 2003. She was pivotal in leading the team to several regional championships and was awarded Most Sportsmanlike Player in 2005. For this induction into the Bobby Orr Hall of Fame her teammates commented “that Sally shared, with all of us who played as well as those who watched, her love of the game.”

Compelled by her enduring commitment to women’s ice hockey, Sally wrote “A Golden Tear,” a book about the 2002 Canada’s women’s hockey team and their journey to a gold medal at the Olympics. At the conclusion of the book and while still playing on the Phantoms, Sally wrote that “my dreams of one day playing in the NHL (National Hockey League) continue to flicker.”

Sally is also recognized for the pre-eminence of her achievement with the Georgian Nordic Ski and Canoe Club. Reflecting on Sally as sportswoman, a teammate commented “her strength was visible; her style, poetry in motion.” Not surprising! Sally loved cross-country skiing. Inspired by the chill of winter and the freedom of the slide she was ‘in the zone” on her skis.

In advance of the 2010 Vancouver Olympic Games, Georgian Nordic signed up to participate in the national ski event Sea to Sea. It was designed to encourage teams to ski 8000 kilometres ‘in-club’ over a period of three years – the distance across Canada. Sally’s team, “Snow People” set out to meet the target. One of the team recalled that, “we all got gung-ho and our team got there with 8000 km in the first year. It was amazing. We were inspired by exercise, teamwork, and plenty of good humour. Sally’s contribution was remarkable. She skied 5636 km, almost three quarters of the distance. We qualified at the gold level!”

As an exceptional endurance skier Sally represented the Parry Sound Club annually at the Canadian Ski Marathon, a demanding 2-day event over a 160 km route from La Chute, Quebec to Ottawa. For individual race competitions she participated across Canada and internationally, particularly the World Masters Cross Country Ski Championships in Sweden, Russia, Switzerland, Italy, and the USA. With her characteristic perseverance and grit, she skied to silver medal victory in the 15 km skate-ski at the 2008 World Masters Championship in Idaho. At the time she was fifty-nine years old. “Better with age!” according to Sally.

In the long winter months, the Club provided the physical challenges that were central to Sally’s well-being. Her gratitude was expressed in the financial bequest she dedicated to the Club. The late Cecil Smith, President in 2015, honoured the memory of Sally saying that “We gained from Sally’s legacy. She left a generous behest to the GNSCC to maintain and improve the trails in recognition of cross- country. We gained from Sally’s gift and for her recognition of cross-country skiing’s provision for lifelong health benefits in our Parry Sound Community.”

Sally loved cross country skiing. In her subtle but determined way she sought to encourage young women to embrace the sport. With this vision in mind, she wrote Guts and Glory, a book in which she celebrated Canada’s 1972 Olympic Cross-Country team. Six of the eight competitors, including Sally’s heroes, Sharon and Shirley Firth, lived, and trained in Canada’s remote Far North of Inuvik. In telling their story Sally inspires each of us to step forward and discover fulfilment through sport.

For Sally, skill, tenacity, camaraderie, and sportsmanship constituted her love for the game of golf, hockey, and cross-country skiing. And for the game of life, most memorably expressed in Sally’s smile, humour and compassion. A teammate said of Sally that “anyone who had the opportunity to play a sport with Sally had their life changed. Sally taught me that winning meant laughter, hard work, and personal accomplishment. She earned the respect of all her teammates.” Sally’s sheer joy in the lived experience was the true expression of her love for the game. She is a most worthy Inductee into the Bobby Orr Hall of Fame.