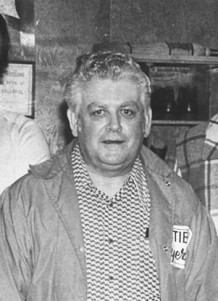 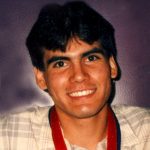 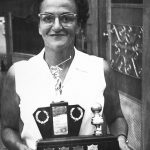 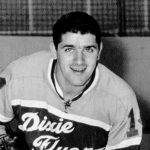 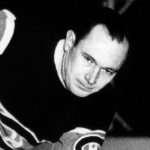 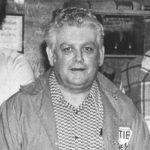 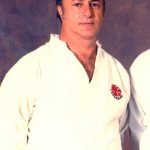 Aubrey Harold Allsopp, the oldest of three children was born to Fred and Hazel Allsopp in Minesing in 1918. At age seven years of age he started playing organized hockey and ball in Midland. He was given the opportunity to play professional ball but his father said, “No, you need to get a real job.” His real job, as it turned out, was a traveling Meat Manager for Dominion Stores in Northern Ontario. The interest in the food retail business which started as a teenager developed and became a vocation later in life.

In 1940, at 22 years of age Allsopp joined the Canadian Army 1st Armored Division. He was transferred to the 2nd Armored Division then finally to the 5th Armored Division. He served on active duty in England, Italy, France, Belgium, Holland, Germany and North Africa. Upon returning from the War in 1945, he married Jean Simpson, the love of his life. In 1946, they bought a retail food store in MacTier. The impact Aubrey had on the MacTier Community for the next 50 years was profound.

He joined the Mactier CPR Beavers Baseball Team in 1946 playing as a catcher and first baseman until 1950. He was a very determined player. It was at this time he met a young Gene Rouselle. In 1954 Aub played for the MacTier Flyers, and Rouselle was the bat boy when they captured the Northern League Championship.

It was a long awaited dream for Allsopp who according to his players, spent all of his time pacing around the field in a state of anxiety until the final out was made. Coach Rouselle and Manager Allsopp could not have been more proud of their team.

He always wanted to field the best team even if it meant pulling a few strings including getting Bobby Orr out of the Oshawa Generals training camp so he could play.

In 1965, the team had another very successful year advancing to the all Ontario Jr. “B” Championship, losing to Zephyr in the finals. The success of the MacTier ball teams was due in large part to Allsopp’s motto, “if you weren’t a good player with an excellent attitude you weren’t on his team. It wouldn’t matter if you were his mother.”

Even though he had very high expectations for his players, he was at the same time very generous. As a way of attracting players, he provided jobs for them in his store. He was as fussy in the store as he was on the ball field. By having most of his players working in the store, he was able to keep an eye on them to be sure they would not get into trouble. He would arrange and pay for transportation for the players who lived in Parry Sound.

In 1969 under Coach Sandy Heidman, the MacTier Legionnaires won the Provincial OASA Juvenile “C” Championship. Once again Aub paced the entire series and no one was sure if he relaxed even after they won the championship. The same year they won the Muskoka Sr. League with MVP pitcher John Young allowing only 17 runs in 18 games and Jerry Jones hitting an outstanding batting average of 467.

Aub not only wanted his players to look good, he made sure the diamond was in excellent shape. In 1967 he had lights and a public address system installed in the Ball Park, the first lighted field in the area. Most of the work was done at his expense.

For Aub playing, coaching, managing and sponsoring was a labour of love filled with many accomplishments and successes. His influence on sports, recreation and service to the MacTier Community spanned more than fifty years and left a trail of outstanding accomplishments.

In 1958-59 Aub along with Earl MacDonald, Ken Keall, Arnold Davis and others built the MacTier Curling Club. The two sheet club is still in use. Aub was an avid curler and served as president on six different occasions.

Also in 1967 he was responsible for reorganizing MacTier Recreation and upgrading the waterfront at the beach. He organized the MacTier Chamber of Commerce. He served three terms on Municipal Council. He sold the Red & White store in 1976 and took on the job as MacTier Recreational Director from 1976 – 1982, looking after the arena, ball park, lakefront and cemetery. In 1974 he was made Justice of the Peace by the Honourable Pauline McGibbon for the District Municipality of Muskoka. His interest in softball never faltered and he served in the OASA as special convener in the 1970’s and 80’s.

He was a man of many talents with sports and recreation a big part of his life. He would not have been able to achieve all that he did if it were not for the unconditional support of his wife Jean. He would say, “She was my rock.” Not only did Jean support Aub, she was also dedicated to her community, organizing and leading projects and functions. Even though Aub spent many hours devoted to his community, his love for Jean and their daughter Jan was first and foremost. Aub is very proud of his family.

Aub Allsopp, a man with vision, dedication and purpose, once he set his mind on building a facility, promoting a sporting team, developing a recreational program, or fulfilling a community need, there was no stopping him. His determination was admired and respected. There is no doubt about it; he was an achiever of remarkable proportions.

He has left a legacy of outstanding achievements as a sports and recreation community builder in MacTier. His induction into the Bobby Orr Hall of Fame is honored and celebrated.

Aub Allsopp passed away peacefully at Sunnybrook Hospital with family at his bedside on December 10, 2006, at age 88 years.